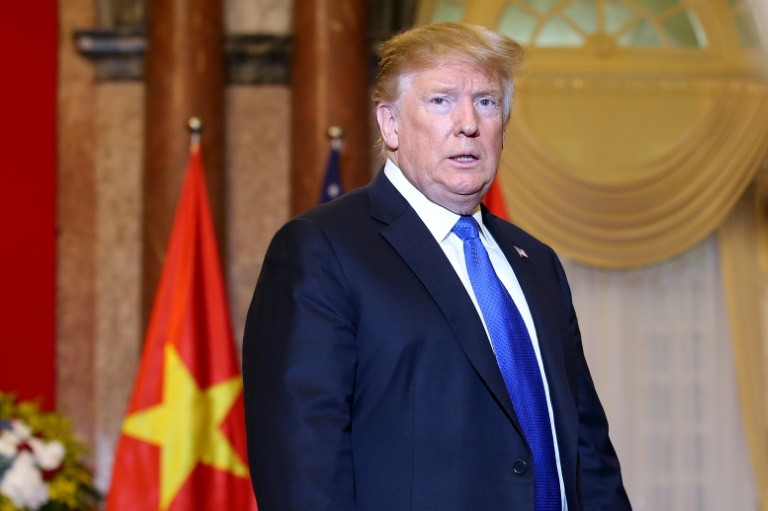 US President Donald Trump touted North Korea’s “AWESOME” future if his “friend” Kim Jong Un, whom he meets for a high-stakes dinner later Wednesday, agrees to give up his nuclear arsenal.

Trump’s enthusiastic tweet came hours before a second summit in the Vietnamese capital Hanoi to build on the pair’s historic first meeting in Singapore in June.

He was encapsulating his belief that only his personal brand of diplomacy and business acumen can break a stand-off with the isolated, nuclear-armed state that has bedevilled US leaders since the end of the Korean war in 1953.

Trump, who has previously spoken of “love” between him and the North Korean strongman, predicted that by abandoning nuclear weapons the country will go on to emulate Vietnam — a communist state once locked in devastating conflict with the United States, but now a thriving trade partner.

“The potential is AWESOME, a great opportunity,” Trump tweeted.

At a meeting with Vietnamese President Nguyen Phu Trong, Trump described how construction he’d seen from his motorcade as he drove from Air Force One to his Hanoi hotel late Tuesday underlined that “you really are an example of what can happen”.

Trump has torn up the script by embracing Kim and a regime long seen by Washington as the most repressive on the planet. But pressure is intensifying on the president to bring back concrete results.

For all the drama, the Singapore summit ended with a vague statement promising to work “towards complete denuclearization of the Korean peninsula”.

Since then, Washington and Pyongyang have disagreed even on what denuclearization means. And while North Korea has now gone more than a year without conducting missile and nuclear tests, it has done nothing to roll back the arsenal already built.

That leaves Trump facing growing criticism that he is being played by the younger man.

On the defensive, Trump said in another tweet Wednesday that opponents in the Democratic Party should “stop talking about what I should do with North Korea and ask themselves instead why they didn’t do ‘it'”.

The Kim-Trump relationship has turned into the diplomatic equivalent of a Hollywood odd-couple bromance. Before Singapore, they were slinging bizarre insults — Trump calling Kim “rocket man” and Kim calling him a “dotard” in response.

With North Korea then busily testing missiles and conducting earth-shaking underground nuclear tests, analysts feared the duo were egging each other on towards a catastrophic confrontation.

Now Trump promotes himself as someone who, by daring to do things differently, defused what he said was a near-war situation inherited on taking over the White House.

“He’s never had a relationship with anybody from this country, and hasn’t had lots of relationships anywhere,” Trump said of Kim before leaving Washington.

The Hanoi summit is more elaborate than the brief first occasion. The White House said Trump and Kim will hold a 10-minute meeting before an approximately 20-minute session without aides, followed by dinner lasting around 90 minutes.

On Thursday they are due to meet again, although no details have been released, adding to the impression that much is being decided at the last minute.

How much to give?

With Trump’s disgraced former lawyer giving lurid testimony to Congress about alleged illegal activities, and lawmakers trying to stop the president’s controversial use of executive power to fund the construction of a US-Mexican border wall, Trump would dearly like to change the news narrative by proclaiming a dramatic win.

In fact, critics warn he is so keen to deal with Kim that he could give away too much, too quickly, endangering US allies South Korea and Japan.

In Singapore, Trump took his own generals by surprise when he announced a suspension of military exercises with the South — something the North badly wanted.

Washington would ideally like Kim to dismantle a key nuclear facility at Yongbyon, allow in international inspectors, or even hand over a list of all his nuclear assets — something the North Koreans have categorically refused to do.

In return, Trump is believed to be considering dangling relief from tough international sanctions. Opening diplomatic liaison offices is another possible US concession.

And Trump could well go further by making a joint declaration that the 1950-53 Korean War, which closed with a ceasefire but no peace treaty, is now over.

Some analysts fear this hugely symbolic gesture would open the door to a cascade of real-world consequences, upsetting the delicate balance in a region where the US and China are already struggling for influence.

But Harry Kazianis, director of Korean Studies at the Washington-based Center for National Interest think-tank, told AFP the gambit might just work.

“I think we will see a peace declaration to end the Korean War as the big deliverable coming out of the summit,” he said.

“There is no way the Kim regime is going to go down the road of handing over its nuclear weapons to what it considers its mortal enemy. If President Trump is willing to trade what amounts to a piece of paper for some plutonium — and possibly much more — then I think history can be made.”

Kim arrives in Hanoi for nuclear summit with Trump

Do you want fries with your North Korea-US summit?