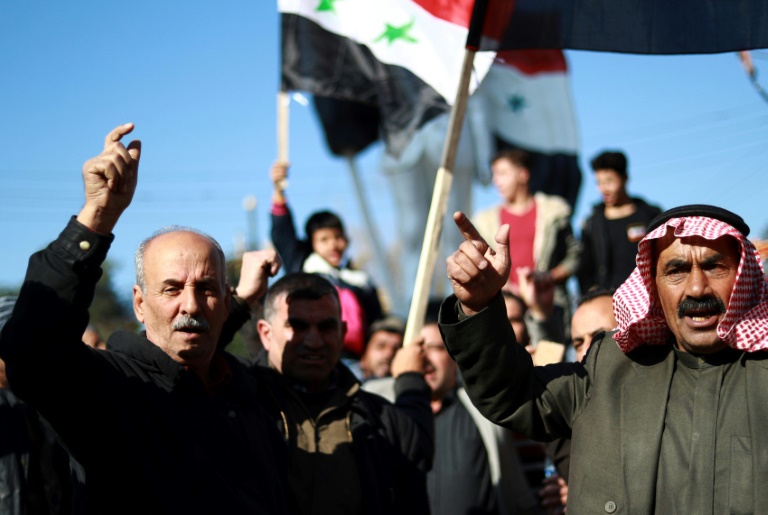 Residents and fighters in territory held by pro-Turkish rebels in northern Syria cautiously welcomed Washington’s decision to pull out troops, viewing it as a chance to push further into Kurdish territory.

“The withdrawal is positive”, said Mustafa Hamush, a resident of Azaz, a city at the heart of a Turkish zone of influence in Syria’s bewilderingly complex civil war.

“When the US withdraws its forces, the Kurdish authorities will automatically be weakened,” said the 20-year-old fashion designer, adding that Turkey and its Syrian rebel allies could seize Kurdish-held regions east of the Euphrates River.

Even before US President Donald Trump shocked allies by announcing the pullout on Wednesday, Turkey had already upped its threats of a new offensive against Syria’s Kurds.

Early this year, Ankara dislodged the Kurdish-dominated Syrian Democratic Forces (SDF) from Afrin, seizing a key stronghold in a US-backed federation that accounts for around 30 percent of Syria’s territory.

Washington and other powers in an anti-jihadist coalition have supported the Kurds as a bulwark against the Islamic State group — another protagonist in Syria’s multi-fronted conflict.

For pharmacist Omar Kazila, also 20, territory under Ankara’s control will increase significantly “if Turkey seizes these regions and replaces the American forces”.

Not everyone in the Turkish-backed rebel zone sees the US withdrawal as an unadulterated positive.

Some residents believe the void left by the planned US departure could see Syria’s military reclaim yet more ground, rather than the Turks extending their own sphere of influence.

Kurdish authorities could mend fences with Damascus, joining forces to better protect themselves against a possible offensive by Ankara, with the Kurds maintaining a degree of autonomy.

The Syrian regime has regained significant ground since Russia intervened on its side in 2015. Opposition groups — including Turkish-backed forces and a former branch of Al-Qaeda — now control less than 10 percent of the country’s territory.

For Ahmad Faruh, a resident of Azaz, the American withdrawal risks being exploited by ISIS, allowing it to stage a comeback in Syria.

The extremist group has seen its territory shrink to a few pockets, its once vast self-declared “caliphate” squeezed by separate offensives by the Washington-backed Kurds and Syria’s Moscow-aligned regime.

“The US withdrawal and the absence of coalition planes could reinforce IS and (enable it) to control new regions,” the 20-year-old student cautioned.

On the frontline, these fears of a jihadist resurgence are shared by some Turkish-backed fighters.

But the forces on the ground are up to the challenge, asserted Mahmud Abu Abdullah, a fighter with rebel group Al-Jabha al-Shamiya.

He said the Ankara-backed rebel factions in Syria are ready to take the fight to ISIS again, as they did in a major Turkish-sponsored operation in 2016 in Jarablus and Al-Bab.

Turkish President Recep Tayyip Erdogan vowed this week to eliminate both ISIS and Kurdish militias in northern Syria, on Friday saying an offensive would start in the coming months.

Sporadic clashes have erupted on frontlines separating the Turkish-backed rebels and the SDF north of Aleppo.

On Saturday, an AFP correspondent saw a cloud of smoke rising near the village of Kaljabrin after an exchange of fire between the two camps.

For Raad Najjar, another Al-Jabha al-Shamiya fighter, “the US withdrawal will be in our favor because we wanted to lead an operation against the Kurds, but we couldn’t do it” while American troops were present.

Hopefully “the factions will wage a war against Minbej, Raqa and all the regions” currently under the control of Kurdish forces.

US envoy in fight against Islamic State quits after Syria pullout