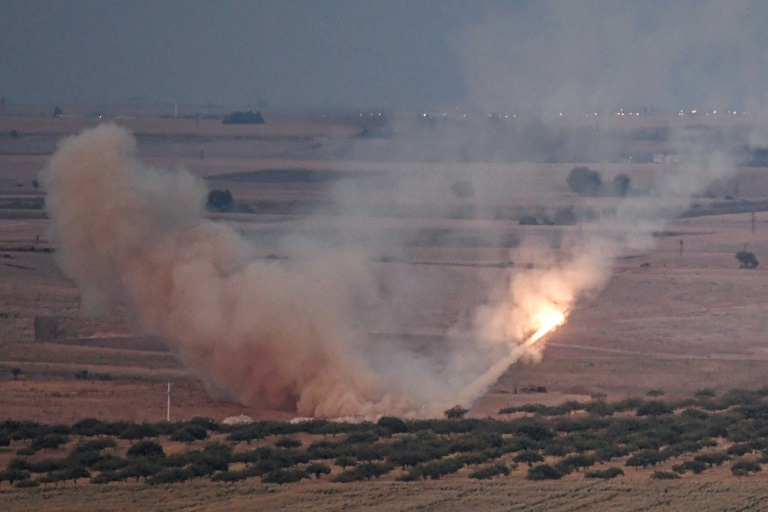 Kurdish fighters battled to defend a key Syrian border town from Turkish-backed forces in a flare-up of violence Tuesday as US President Donald Trump sent his vice president and top diplomat to Ankara to demand a ceasefire.

Russia, already the key foreign power in Syria, stepped into the void caused by Trump’s withdrawal of US troops by deploying patrols to prevent clashes between Syrian and Turkish forces.

President Bashar al-Assad’s troops have returned to key northern areas for the first time in years in a deal with the Kurds, seeking protection after Trump ordered the withdrawal of some 1,000 US troops.

Trump, facing mounting criticism in Washington on Syria as well as an unrelated impeachment inquiry, has hit back at Turkish President Recep Tayyip Erdogan, slapping sanctions on three cabinet officials and raising tariffs on the country’s steel.

Vice President Mike Pence said he would meet with Erdogan on Thursday and “voice the United States’ commitment to reach an immediate ceasefire and the conditions for a negotiated settlement”, his office said in a statement.

He reiterated that Trump will pursue “punishing economic sanctions” until a resolution is reached.

In a sign of US determination, Pence will lead a high-powered team that includes Secretary of State Mike Pompeo, Trump said.

But Erdogan was defiant ahead of the visit.

European powers — who are particularly spooked by the prospect that Islamic State group fighters jailed by the Kurds will go free — have taken an increasingly tough tone with Turkey.

Britain and Spain became the latest powers to suspend military exports to Turkey. Canada made a similar move.

A day after regime forces entered the key city of Manbij, the Kurdish-led Syrian Democratic Forces (SDF) are mounting a desperate defense to the east of the border town of Ras al-Ain, using tunnels, berms and trenches.

An AFP correspondent in the area said clashes around the town continued Tuesday, despite Ankara’s repeated claims it had captured the area.

The Syrian Observatory for Human Rights said Kurdish fighters had launched “a large counterattack against Turkish forces and their Syrian proxies near Ras al-Ain”, later reporting “fierce combat” in the west of town as well as in Tal Abyad.

Since launching their assault on October 9, Turkish-backed forces have secured more than 100 kilometres (60 miles) of border, but Ras al-Ain — Siri Kani in Kurdish — has held out.

Erdogan, who like Trump faces political difficulties at home, wants to create a buffer zone stretching 30 kilometres (20 miles) from the border into Syrian territory.

He wants to keep at bay the SDF as well as resettle some of the 3.6 million Syrian refugees now in Turkey.

“God willing, we will quickly secure the region stretching from Manbij to our border with Iraq,” Erdogan said.

The offensive has killed dozens of civilians, mostly on the Kurdish side, and displaced at least 160,000 people.

Russia said its military police were patrolling a zone separating regime troops and Turkish forces, in cooperation with Ankara.

Russia’s special envoy on Syria, Alexander Lavrentyev, said Turkish and Syrian officials were in contact to avoid clashes which “would simply be unacceptable”.

With Trump’s critics saying that he handed over US allies and stretches of Syria to Russia, the United States tried to play down Moscow’s role.

“The number of Russians is very, very limited. But it only takes a few Russians with a big Russian flag to get everybody to pay attention,” a senior administration official told reporters in Washington.

The Kurds lost 11,000 fighters as they helped Western powers crush IS.

European governments fear that the chaos could trigger mass breakouts by thousands of IS fighters, triggering a resurgence of the lethal group that has wreaked havoc through attacks in the West.

The Kurds have said hundreds of IS relatives have escaped.

At least three French women escapees were “retrieved” by IS, according to messages they sent to their lawyer seen by AFP.

An SDF official on Twitter Tuesday said more IS relatives had tried and failed to escape the overcrowded camped of Al-Hol in eastern Syria.

The US official, however, said that Washington was not aware of any “major” jihadist breakout, although between 50 and 150 women and children had fled.