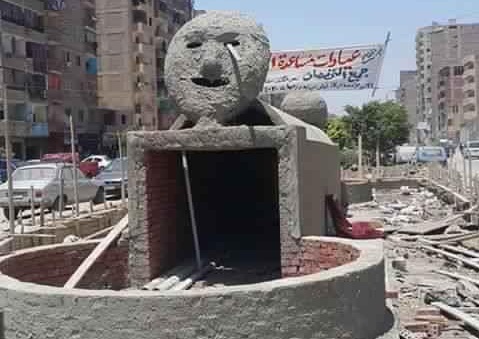 President of the National Organization for Urban Harmony of Culture Ministry, Mohamed Abo Se’ada, said he is pushing to get the distorted sculptures, spread lately in some public squares, demolished.

Abo Se’ada statements on Tuesday came after a photo for a statue being constructed in the Marg area went viral on social media, with the mock caption “the latest masterpiece of the great Egyptian people.”

These incidences have reoccurred over the past two years, in Minya, Aswan, Sohag and Sharqiya.

Abo Se’ada said that he had notified the head of the municipality council of Marg neighborhood in Cairo, to demolish the statue, adding that it’s not related to art and creativity.

A slap in the face: Ugly art in Egypt’s public spaces

He stated that the National Organization for Urban Harmony has launched an initiative of Developing the Squares of Egypt, which aims to restore cultural aspects of the squares, pointing out that the designs and re-planning of 21 squares have been completed in various governorates.

Governorates banned from installing artworks in parks without ministry permission