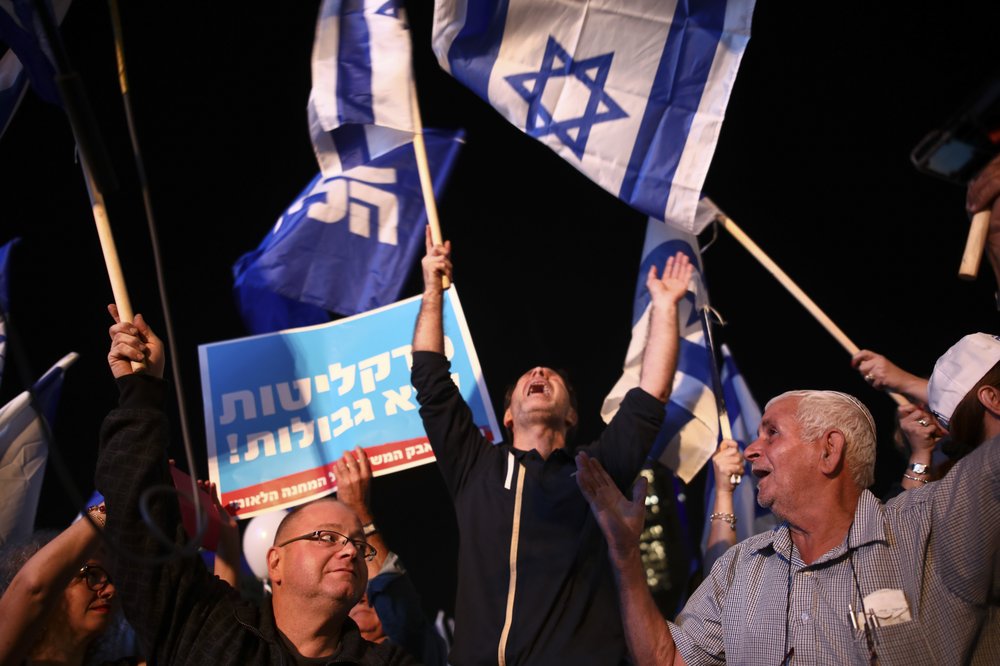 TEL AVIV, Israel (AP) — Thousands of people rallied in support of Prime Minister Benjamin Netanyahu on Tuesday in what was intended to be a show of strength for the Israeli leader as he battles a corruption indictment and a possible rebellion within his own party.

While the demonstration has no impact on the legal charges, a strong turnout could give Netanyahu a boost in terms of public opinion and against potential rivals in his Likud party as the country appears to be heading toward new elections. Netanyahu has claimed that he is the victim of an attempted “coup” by overzealous police investigators and prosecutors.

As the protest got underway in central Tel Aviv, a crowd of roughly 5,000 people rallied for Netanyahu, hoisting Israeli flags and posters that accused prosecutors of “blackmail” and “threats.” In a possible sign of trouble for Netanyahu, most of Likud’s senior officials skipped the event.

Netanyahu ally Micky Zohar, one of the few Likud officials to attend, took to the stage to criticize the country’s legal system.

He said the goal of the demonstration was not to “attack” the legal system, drawing boos from the crowd. “We can’t replace the system, but we can change it,” he said.

Culture Minister Miri Regev, another Netanyahu backer, said the protest aimed to “convey a message that the rule of law isn’t above the law.”

With Israel facing a potential third election in less than a year, Netanyahu is seeking to put down any potential rebellion in Likud by rallying his hard-line base of nationalist and religious voters.

Despite calls for his resignation, Netanyahu seems determined to cling to power and fight the charges from the prime minister’s office.

Only one top official, Gideon Saar, is openly challenging the prime minister, but the silence of others is raising speculation that Netanyahu’s support could be cracking.

The prime minister has been lashing out at police and prosecutors since Israel’s attorney general last Thursday indicted Netanyahu on fraud, breach of trust and bribery charges.

His backers have already staged small demonstrations supporting him, but Tuesday night’s event appeared to be aimed at stifling dissent in the party’s ranks.

Netanyahu himself was not expected to attend the event, which will include representatives of fringe right-wing groups.

Speaking at a conference Tuesday, Attorney General Avichai Mandelblit, who was appointed by Netanyahu, appeared to take aim at the prime minister’s attacks on the legal system.

The fact that prosecutors “are traveling with security guards just because they fulfilled their duties is unacceptable,” he said. Without mentioning Netanyahu, the attorney general called it “outrageous” that there have been “threats” and “baseless slander” directed at law enforcement following the indictment last week.

Yohanan Plesner, president of the non-partisan Israel Democracy Institute think tank, said Netanyahu was appealing to his political partners at the expense of undermining public trust in the state, something he called “a dangerous and reckless strategy.”

“Since the prime minister became a defendant he is in a serious situation of conflict of interests. He cannot both oversee and be in charge of law enforcement institutions and confront them as a belligerent defendant,” he said.

Israel’s political system has been in limbo for the past year after inconclusive elections in April and September. With neither Netanyahu nor his main rival, former military chief Benny Gantz, able to secure a parliamentary majority, the country seems to be barreling toward its third election in under 12 months.

Most observers believe a unity government between their parties, which together control a comfortable majority, is the best way out of the crisis. But Gantz and his partners have ruled out a power-sharing rotation with an indicted prime minister, urging Likud to choose a different leader.

“Benjamin Netanyahu cannot continue to lead the country,” he said. “It’s not only the indictments. It’s what he’s doing to us, the attacks on the rule of law, on law enforcement officials. The attempt to divide us, to encourage us to attack our brothers and sisters.”

The indictment marks the first time a sitting Israeli prime minister has been charged with a crime. Unlike mayors or regular ministers, the prime minister is not required by Israeli law to resign if indicted and Netanyahu is steadfastly vowing to remain in office. The only practical way to unseat him appears to be from within.

The Likud’s governing bodies are working to set a date for a party primary, but it appears unlikely that will happen before Dec. 11, the cutoff date to form a government and avert new elections.

After both Netanyahu and Gantz failed to cobble together a coalition in the time allotted to them, Israel is in the final 21-day period for a majority of the 120-seat parliament to throw support behind any candidate. But the indictment, and Netanyahu’s scorched-earth policy, has only hardened the opposing camps.

In the meantime, a growing number of Israeli luminaries has called on Netanyahu to step down for the good of the country.

“You are grasping the country by its neck solely in order to try and save yourself from trial based on the indictment against you,” renowned author A.B. Yehoshua wrote Tuesday in Yediot Ahronot.